On a cold, cloudy day in Colorado, ski racer Alice McKennis suits up. She buckles her boots, puts on a back protector and dons a tightfitting speed suit.

She's training at the U.S. Ski Team's Speed Center at Copper Mountain near Vail, Colo. — and how she got here is exceptional.

The 24-year-old has been skiing since she was a toddler. Last January, she won the downhill Alpine Ski World Cup; in March, she broke her leg in 30 places. But now she's back and looking for a second shot at an Olympic medal on Team USA in Sochi, Russia. The team will be selected by late January.

After her injury, McKennis' doctors told her she probably wouldn't be able to ski the following season, let alone race. But the surgery and healing went much better than expected. Now, McKennis has a metal plate and 11 screws in her leg. She even says she has an edge on the competition becauseof her March injuries and earlier ones.

"I'd say I'm pretty tough," she says. "I've broken both of my legs, essentially, and come back from these injuries. I kinda feel like with that sort of situation, you have to be supertough to do it. And to make the Olympics is extremely hard, so it takes a certain kind of toughness to do that."

On this day, McKennis is focusing on technique. She's planning to ski the entire course from top to bottom, something she hasn't done since her most recent injury.

She takes several shorter runs leading up to the last one of the day, which will cover the entire length of the mountain — about 2 miles. She takes off and flies down the course dotted with gates that skiers zigzag around. McKennis flies by going upwards of 65 miles per hour.

McKennis is improving quickly because she has a goal, says Pascal Hasler, one of her coaches.

"With her injury, I mean, we saw the pictures, we know what's in there — plates and screws. And I think it's amazing how she's doing," Hasler says.

That is an inspiration for others, including younger skiers like 12-year-old Michal Hale, a budding ski racer who's also from Colorado and has been tracking McKennis' career for half her life.

"She's a big role model for me," Hale says. "Like, watching her skiing makes me feel like I could probably do that, too."

Back out on the snow, McKennis is getting ready to pack it in for the day.

"Today, I mean, I was definitely nervous to run the full length of the course," she says. "But once I do it, I'm like, all right, let's keep moving forward, and you know, skiing faster and better." 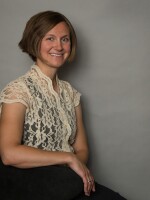 Marci Krivonen
Originally from Montana, Marci grew up near the mountains and can't get enough of them. She began in broadcasting in Missoula, Montana where she anchored Montana Public Radio's local Evening Edition news program. She then picked up a camera and tripod and worked for Missoula's local CBS television station as a reporter. Shortly after that, she returned to radio and became the Assistant News Director at a radio station in Oshkosh, Wisconsin. Marci began at Aspen Public Radio in 2007 as the station's morning host and reporter. Although you can occasionally hear Marci in the mornings, she is now quite content to be sleeping in and reporting all day. When not at the station, Marci is on her road bike, meeting people, or skiing.
See stories by Marci Krivonen