The universe is full of massive celestial bodies that slam into each other. Albert Einstein predicted that these cosmic collisions send out invisible shocks called gravitational waves through the universe, warping space-time. Think of a bowling ball tossed onto a trampoline. 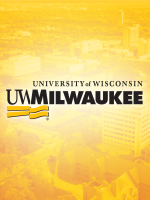 UW-Milwaukee
The University of Wisconsin-Milwaukee produces the UWM Chancellor’s Report and Curious Campus, a show about science, discovery and culture.
See stories by UW-Milwaukee