The intersection of history, memory, and flavor are on the mind of Lake Effect essayist Cari Taylor-Carlson.

When I feel overwhelmed, food is my security, my safe place when I’m lonely, perhaps even my therapist. It connects me to many of my favorite memories. Ask me what I did yesterday, or last week, and I need to check my calendar to jog my memory. Ask me what I had for dinner on my wedding night fifty years ago and I’ll tell you the lamb chops were rare, the green beans came with slivered almonds, and rosemary roasted potatoes surprised my husband and me because we grew up with butter and cream laden mashed.

People have different ways of storing memories, photos, journals, scrapbooks; I store mine in my mouth, trust that my taste buds won’t let me down, thankful my repository doesn’t occupy any space on crowded closet shelves.

Science tells us taste bypasses the logical brain and travels to the more primitive part where instinct and memory reside. It can function as an emotional link to the past, often releasing a cornucopia of sensory recollections, smells, sounds, places, settings, and people.

It’s a direct path to my grandmother’s cottage in the 1940s where I spent lazy summers forced to drink warm milk from the local farmer who delivered it straight from his cow. Grandma said it tasted like the flowers in the field. I said it tasted like a swamp. She flavored it with vanilla, cinnamon, and sugar, and only then would I condescend to drink it, because in the 40s, children were mainly obedient.

The first time I order Horchata at a Mexican restaurant, sweetened rice milk flavored with vanilla and cinnamon, it sends me back to Grandma’s table and a rose-colored glass filled with milk which she had doctored to please her picky granddaughter.

That’s when memories start to pile up: the snuff in the little silver box Grandma used to clear her nostrils, the swimmer’s itch I contacted in the less than pristine lake water, the cold seat in the outhouse, the freedom to cross the highway and roam in the woods by myself, Grandma’s bald head when she took off her wig.

We can’t decide at a moment’s notice to recreate these nuggets from the past. They’re serendipitous, unexpected, uninvited, and often have an emotional component because we tend to recall emotionally charged events more clearly than the boring ones.

Orange sherbet at a friend’s home recently blasts me back to Fort Wayne IN, in the 50s, when at age fourteen I worked every Saturday at a department store. The work was repetitive, boring, getting packages ready for the mail, but that didn’t matter to this young teen. What mattered was the freedom to eat lunch by myself at a downtown restaurant. All week I anticipated orange juice mixed with orange sherbet, the most delicious drink on the planet if you’re fourteen, seated at a counter surrounded by grown-ups. I craved it, but that craving was more about my teenage longing for new experiences and autonomy, than it was about the drink.

It’s a conundrum, which comes first, the taste that kick starts the memory, or the memory that brings back the taste. When I wander down a road crowded with souvenirs from my travels, they are dominated by what I ate. Just like seared lamb chops on my wedding night, thoughts of Nepal stray to a night in Kathmandu when my guide said, “How’s your stomach?”

I replied “Fine,” so he took me to a tiny food stall where we ate “momo,” steamed dough stuffed with water buffalo meat swimming in delicious green sauce.

After I ate several momo, and complemented my guide on his choice of food stalls, he led me down a few steps to a small dark room so he could greet the cook who explained he was ageing the fly-coated water buffalo meat that hung next to him on a greasy wall. He was closing for the night but said if we returned the next morning, the meat would be ready.

The first time I taste green tomatilla salsa at a Mexican restaurant, I time-travel back to that night in Nepal. The taste is almost identical. A plethora of visceral memories flood my brain: the tangy green sauce, the chewy meat inside the tender dough, the smell of the rotting meat I had just eaten, the cacophony of traffic in Kathmandu, the dungeon-like room, the flies. The memory arrives, uninvited, as clearly as if it happened yesterday. 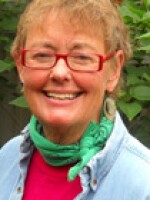