It was very sad to read about the death of Nashville singer and songwriter Russell Smith. He visited the Mountain Stage four times: Solo in 1992, with Run C&W in 1993 and with The Amazing Rhythm Aces in 1996 and 1999.

If all he had written was "Third Rate Romance," he would be in my personal Hall of Fame, but he did so much more. With Aces, Run C&W and solo, he showed in his songs and his performances that rare combination of extreme wit and heart felt emotional depth. He was just a good ole country boy when he visited us. I wish he could come back again.

I won't try to list his accomplishments — you can look those up — but I hope you have time for this small sample of his performances: "Don't Go to Strangers" and "Under the Overpass" with "Spud" Louvin and The Mountain Stage Band; "Sweet Soul Music" ("as the Good Lord intended it, bluegrass style") with Run C&W; and "Third Rate Romance" with The Amazing Rhythm Aces. 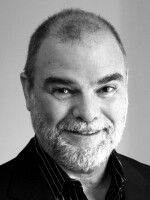 Larry Groce
Larry Groce has been host and artistic director of West Virginia Public Radio's Mountain Stage since its beginning in 1983. His taste and personality have helped set the tone of this long running radio and television series.
See stories by Larry Groce