The Trump administration dropped its plans to impose restrictions on the number of online classes international students in the U.S. are allowed to take in the upcoming school year. The reversal was announced at a hearing in the lawsuit brought against federal officials by Harvard and MIT.

Earlier in the week, Wisconsin Attorney General Josh Kaul joined 16 other states in a lawsuit opposing the ICE rule. The lawsuit includes statements from Wisconsin universities describing how they would be harmed by the regulation. UW-Milwaukee "could lose up to half of the approximately 1,200 international students, who pay approximately $21.5 million in tuition, and $5.1 million in housing, in addition to the money these students spend at businesses supporting the local economy."

Colleges are trying to figure out how to safely resume classes this fall amid the coronavirus pandemic. Many will hold the lion’s share of classes online.

But a new forthcoming rule from federal immigration officials warns that international students will be deported if their course load is all-online. Some see the rule as an attempt by the federal government to push colleges to reopen.

Yuti Modi is a senior at Milwaukee School of Engineering (MSOE.) She’s from India and was looking forward to graduating with a degree in business administration next May. But the new rule from U.S. Immigration and Customs Enforcement makes her more uncertain about her future.

“We come here with our aspirations, and our parents invest a lot in our education. After giving so much, after studying so much, we have to choose between education and health,” Modi said. “It feels really disrespectful, especially during such times of uncertainty.”

Katie Taske, the assistant director of international affairs at MSOE, has been fielding questions from the school’s about 100 international students.

“In an already very stressful time, now they’re just even more confused and faced with even more uncertainty,” Taske said.

The ICE rule says that international students at colleges with entirely online class structures this fall will not be allowed in the U.S.

MSOE, like most Milwaukee-area colleges, plans to use a hybrid model this fall – that means a combination of online and in-person classes. Taske says this should allow international students to meet ICE requirements, by taking at least one in-person class.

“I think for international students to have at least one class towards their degree in a face-to-face, at least once or twice a week, isn’t going to be too difficult for us,” Taske said.

The same goes for UWM, which is also using a hybrid model this fall. Director of International Student Services Jennifer Gruenewald is hopeful UWM's about 1,200 international students will be able to meet the face-to-face class requirement.

“The faculty are very concerned in ensuring the international students have an appropriate number of hybrid-style courses with a face-to-face component,” Gruenewald said. “But it will add another layer of tedious record-keeping to ensure the students can maintain their status.”

"It will add another layer of tedious record-keeping to ensure the students can maintain their status." - Jennifer Gruenewald

MSOE student Modi is still waiting to hear which of her classes will be in-person and online.

“I would really prefer my classes to be online given the COVID situation,” Modi said.

But under the new ICE rule, she won’t be given that option if she wants to stay in the U.S.

This rule has sparked a major backlash from universities across the county. Harvard and MIT immediately challenged the regulation in court. In a call with reporters Thursday, UW System interim President Tommy Thompson said he doesn’t plan to take legal action. Thompson thinks the system’s international students will be safe from the rule.

“We think with our hybrid system of having online teaching and also in-person, that we are not gonna be subject to that rule,” Thompson said.

But schools with a hybrid model would likely be affected if they had to shift entirely online because of a spike in COVID-19 cases. The ICE rule states that if campuses go fully remote midway through the year, international students would either have to transfer to a different school or leave the country.

UWM Chancellor Mark Mone noted that part of the rule in an email to staff and students Thursday. Mone condemned the regulation and said he hoped it would be thrown out.

"This rule makes our decisions harder by putting health and safety in competition with our students’ educational progress, and it places the university in an untenable position," Mone wrote. "It is my fervent hope that we and the other universities lobbying on this issue will be able to effect a change."

Modi is worried about the possibility of being sent back to India if MSOE is forced to shift online. She says taking online classes in India would be difficult because of the time zone difference and internet bandwidth limits.

Modi says this situation could make international students hesitant to come to the U.S. in the future.

“With rules like this coming up all of a sudden, it just reduces your trust,” Modi said. “It shows you we won’t be kept safe, anything can happen at any time. You can just be let go any time.”

Modi says she does feel supported by MSOE and her fellow students. Like everyone else, she’ll wait to see whether pushback from colleges will affect the final draft of the ICE regulations on international students.

Have a question about education you'd like WUWM's Emily Files to dig into? Submit it below. 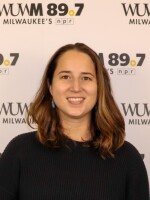 Emily Files
Emily has been reporting on Milwaukee-area education for WUWM since 2018.
See stories by Emily Files
Related Content