A few months ago, we introduced you to a woman who helps people downsize, or eliminate a household.  That can happen when someone dies, or moves into assisted living.  It is, physically, a big job, but as Lake Effect essayist Joanne Nelson can attest, the job’s emotional toll is just as large:

Peggy from up the block is sorting hangers when I call. She’s been readying her mother’s house for an estate sale since increasing forgetfulness and a bad fall resulted in a nursing home admission for her mom, Bev. The hangers clank against each other as Peggy sorts through them.

Peggy cares about such things despite the chaos of helping Bev get settled. They are close—much closer than my parents and I ever were — and Peggy will make sure each detail is managed lovingly, that even hangers are handled carefully.  I performed these same tasks for my mother two years earlier. When Peggy called to lend support back then, I shared stories of her unkempt home — hidden beer cans, smelly laundry, unpaid bills.  I confessed anxiety about finances, guilt over selling my mother’s house, and my fear she’d magically recover from alcohol-induced dementia and return to find strangers in her kitchen.

Now it’s Peggy’s turn. At some point during our conversation she must quiet her hands as I stop hearing the clink of dry cleaners’ metal hangers and the dull plastic clack of store-bought ones. Our approaches to undoing our mother’s homes differ; Peggy has lined her hallways with boxes to sort through, something I’d never have considered. I’m envious of this desire to linger over possessions —even now recognizing my old longing for someone else’s mother.

When I began cleaning, I took coats and dresses — some new — to the Salvation Army drop box. But my car reeked of mildew after these trips and I worried the other accumulated donations would be ruined. Peggy might have washed the remaining clothing, but I threw it all into the thirty-foot dumpster I’d rented. The hangers ended up there also; wooden for pants, plastic for blouses, and pink-knitted for sweaters. I flung them over the dumpster’s eight-foot wall, the metal ones gleaming against the fall sky and then clattering down amongst the other garbage.

This was the best I could do when it was my turn to organize, ready the house for a realtor, and find money to pay the nursing home. Or at least it’s what I did do. The truth is I didn’t want my mother’s hangers mixed with my own. Her years of drinking and neglect clung to everything.

Occasional gifts arose from the work, however. While cleaning one afternoon a memory returned. When I was little, before my parents divorced, Mom ironed in our basement. She’d pull my father’s freshly laundered shirts off hangers hung on the hot water pipes of the ceiling and press them while talking on the phone, the receiver cradled between her neck and shoulder. General Hospital played on the TV as she flattened seams and chatted. When finished she’d button the warm shirts onto hangers balanced on the ironing board. My job was to carry the shirts upstairs and put them away. Mom cautioned me not to wrinkle them. “Don’t do a job unless you’re going to do it right.”

In between my dismantling of her home and her passing were long days of decline for my mother. Days in which she became her best self, a tender woman who’d kiss me and call me “lovely.” Towards the end, when she was unable to do anything for herself, I soaked a mouth swab in Pepsi and held it to her dry lips. When she locked her teeth around it, I talked quietly to her, gently wiggled the swab free, dipped it back in the soda, and pressed it again to her waiting tongue. This small communion between us was slow work; this giving of what she wanted in her drab room, surrounded by her few remaining possessions.

Essayist Joanne Nelson is an educator and writer living in Hartland. She is the nonfiction editor for a literary journal, The Tishman Review. 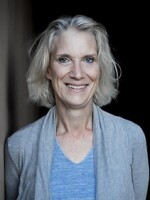 Joanne Nelson
Joanne Nelson is the author of the memoir, This is How We Leave, forthcoming from Vine Leaves Press. Her writing appears in anthologies and literary journals such as Brevity, the Citron Review, the museum of americana, and Redivider. Nelson lives in Hartland, Wis., where she develops and leads community programs, maintains a psychotherapy practice, and adjuncts. More information about Joanne Nelson can be found here.
See stories by Joanne Nelson
Go to Lake Effect's homepage