Every so often, when he isn’t off in California trying out this year’s vintage, Ray Fister stops in to chat about wine. Lake Effect's wine contributor is the co-creator and voice of the wine blog and podcast Life Between the Vines.

Lake Effect's Bonnie North managed to catch him just as he was about to head west again and he had rosé on his mind: "The thing about rosés versus old world and new world wines is it changes the playing field. They’re really great just about everywhere. It seems to be a wine that’s hard to screw up."

Rosé can be anything, Fister says - made from Grenache, Cabernet or Pinot Noir; can be dry, sweet and everything in between.

He notes that people often mistake it with the 1980s boom of White Zinfandel. And while some people may turn their noses at Zinfandel; Fister says, "White Zin that really helped create the wine boom of what we're experiencing now." 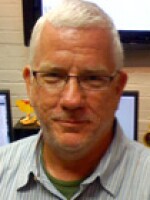 Ray Fister
Ray Fister is the co-creator and voice of the wine blog and podcast Life Between the Vines. Fister is also the owner and engineer of 5th Floor Recording Company. He has 30 years experience in professional recording, including 21 years working in the Milwaukee market.
See stories by Ray Fister
Go to Lake Effect's homepage