This is WUWM
Precious Lives
Stories about kids, guns and how to stop the violence. Precious Lives, created by 371 Productions, is a 2-year, 100-part weekly radio series about gun violence and young people in the Milwaukee area. The series applies a public health lens to each story to help listeners understand the full scope of the problem: who are the victims and the shooters; how are the weapons obtained; and what can we change about the environment that contributes to violence in Milwaukee?

WUWM 89.7 FM – Milwaukee Public Radio is one of 15 stations chosen after a national competition to incubate storytelling experiments and expand public media to more Americans.

Localore: Finding America was created by AIR, a Boston-based network of independent public media producers, to bring together the most gifted producers and forward-thinking stations in the industry to invent new media models and realize the founding vision of a public broadcasting service for “all of the people.” Principle funding comes from the Corporation for Public Broadcasting with additional support from the Wyncote Foundation, the Ford Foundation, the MacArthur Foundation and the National Endowment for the Arts.

In Milwaukee, independent producer Eric Von, in collaboration with Brad Lichtenstein of 371 Productions and Michelle Maternowski of WUWM, will create "Precious Lives: Before the Gunshots," an expansion of our two-year series on kids and gun violence. Through stories and live events created by and with people touched by this violence, we will examine the roots of the bloodshed in an effort to improve life for everyone in the city.

"Finding America offers just what the name suggests, an opportunity for public radio to reach deeper into our community to identify with those who may not be a part of our regular broadcast circle,” said Eric Von. “In Milwaukee, we will dig deeper into the issue of gun violence - through radio stories, live performances and social media - to widen the circle of people who care about the issue and to unite our city around solutions."

The winning teams were selected from more than 200 applications from independent media talent, radio and television stations, educators, and coders.

The teams, matched by AIR with local stations, will produce events, experimental digital projects, and stories for broadcast and publication.

“Localore looks at how and where community talks about itself, where its data is gathered, and where the flow of information moves or is interrupted,” said Sue Schardt, AIR’s executive director and the executive producer of Localore. “Our independent producers are building media with and for that community, on the radio, on the Internet, and in the streets.” 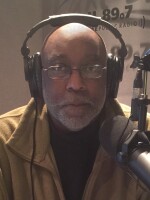 Eric Von
Eric Von was the host of Precious Lives, a series that was created in partnership with 371 Productions, WUWM 89.7 FM - Milwaukee Public Radio, the Milwaukee Journal Sentinel, WNOV and the Wisconsin Center for Investigative Journalism.
See stories by Eric Von