Contest wants young Wisconsin artists to help get out the vote

A new art contest invites young people to come up with designs that will encourage others to vote.

By sharing their work on social media, they can help get out the vote for major races across Wisconsin. Those elections are coming up on Nov. 8.

“We’re hoping that people will tap into the power of voting and declare their power by letting people know, ‘I am a voter,’” says Rev. Greg Lewis of St. Gabriel’s Church of God in Christ, and director of Souls to the Polls WI, a nonprofit dedicated to increasing voter turnout in the Black community. “It insinuates that there’s something good about it. And second of all, it signifies a right that has been denied folks of color for years.”

The “I Am a Voter” contest is based on two things: the power of art to motivate people and the power of voting to build stronger communities. Put those together, and you get artwork that encourages people to vote. The graphics should be designed to shine on social media, like Instagram and TikTok.

There’s $10,000 available in scholarships for the contest winners. Six winners will be selected, earning prizes of either $1,000 or $3,000 dollars.

The competition is open to anyone in Wisconsin, though organizers are especially encouraging high school and college students to participate.

Souls to the Polls is sponsoring the contest, along with a group of non-partisan organizations, including the BrandLab Milwaukee, Greater Together, and the Milwaukee Institute of Art and Design.

“At a time when our rights are being taken away, voting is essential,” Kweku TeAngelo Cargile Jr., director of the BrandLab, said in a release. “This scholarship is about empowering our young people and creating spaces for their voices to be heard.”

Lewis wants to see strong turn-out among young people of color in the upcoming elections, in which Wisconsin will vote on close races for both governor and senator.

The “I Am a Voter” contest takes its name from a long history of civil rights protest phrases.

In the 18th century, American and British abolitionists used the phrase “Am I not a man and a brother?” to recognize Black humanity. In her famous 1851 speech on African American and women's rights, Sojourner Truth built on that legacy when she asked “And ain’t I a woman?”

During the 1968 sanitation workers strike in Memphis, Lewis adds, “Those signs said ‘I am a man.’ Declaring that you’re a person too, that you’re relevant.”

Declaring that you’re a voter is equally powerful, Lewis says. He believes voters of color are particularly important now.

“It’s the most important vote in the country because our white brothers and sisters are split right down the middle,” he says. “People of color come in and vote and make the difference. If you don’t vote, that makes a difference also.”

The contest organizers recommend that entrants stay away from partisan designs. Nonpartisan messaging is a more effective way to connect with people, they say. That could mean focusing on shared values like unity, a brighter future, or a healthier community.

“When more people participate in a democratic process of going to the polls, I think our democracy thrives and works much more effectively,” says Coe Douglas, a design lecturer at the University of Wisconsin-Milwaukee and part of the team behind the art contest. “That’s why we’re doing this.”

To enter, artists should share their designs on social media with #IAmAVoterWI, including a caption explaining why voting is important to them. They should also submit their work to the contest website. Entry designs can be illustrations, graphics, short videos, or GIFs.

“We’re looking for our most creative approach to how we tell this story,” Douglas says. “Throw your hat in the ring, surprise and delight us with your imagination.”

A panel of judges will select five winners, while a public vote will grant the final award. The contest runs until Oct. 14. 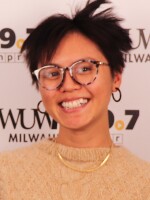