Waukesha Parade Deaths Trial
WUWM's coverage of the Darrell Brooks trial. He is the Milwaukee man accused of using his SUV to kill six people and injure dozens more at the Waukesha Christmas parade in 2021.

Opening statements are scheduled Thursday in the high-profile trial of Darrell Brooks. Brooks is accused of killing six people and injuring dozens by driving through the Waukesha Christmas parade last November. In June, a Waukesha County judge denied Brooks’ request to move the trial to an outside county or bring in outside jurors. On Tuesday, the court selected a jury of 16 white people.

Darrell Brooks is facing dozens of charges. He is is representing himself and has pleaded not guilty to the charges. A jury of 10 white men and 6 white women will hear the trial. Brooks is Black.

Anthony Cotton is a Wisconsin defense attorney. Cotton says the jury selection is significant because it doesn’t represent a jury of Brooks’ racial peers.

"That's pretty par for the course to have all white juries — it's a predominantly white community," Cotton says. "The way in which jurors are selected oftentimes produces that type of jury pool in Waukesha County. It never feels fair when you’ve got an all-white jury judging a Black person."

In June, the lawyers who represented Brooks at the time argued in court that the results of a questionnaire sent to more than 1,500 potential jurors in Waukesha County showed Brooks could not get a fair trial there. When Judge Jennifer Dorow denied Brooks’ request at that time, she said:

"This court is committed to ensuring that the rights of Mr. Brooks to a fair trial and impartial jury are protected," Dorow said. "The defense has failed to demonstrate that there is a likelihood of community prejudice so pervasive as to preclude the possibility of a fair trial in Waukesha County."

"There would be more racial diversity, but perhaps more significantly, would represent a portion of the population that probably doesn't have as strong of an opinion about the case as Waukesha jurors would have."

Cotton says change of venue requests are made somewhat regularly in higher-profile criminal cases, but he adds that Brooks getting a fair trial is less about the racial composition of the jury and more about "the circus that the whole thing has become."

"A lot of times we talk about competency, like whether a person has the ability to represent themselves, but that's different than the question of whether the person is competent, either to understand the proceedings or to assist in their defense."

Brooks was removed from the courtroom on Tuesday and had to watch the proceedings from another room after several disruptions. Brooks initially pleaded not guilty due to mental disease, but later withdrew that plea.

In September, Judge Dorow approved Brooks’ request to let him represent himself. Cotton says Brooks should be evaluated by a doctor, which could happen mid-trial, because he won’t get a fair trial conducting it on his own. 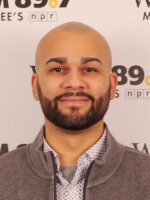 Eddie Morales
Eddie Morales joined WUWM in 2022 as a reporter. Before working at WUWM, he was the North Shore communities reporter for the Now News Group and Milwaukee Journal Sentinel.
See stories by Eddie Morales