When you see and hear a performance by Mandy Harvey, one of the final ten contestants in the latest round of America's Got Talent,the first thing you notice is her voice. Look down at her feet, though, and you might also notice she's not wearing shoes.

"[It's] so you can feel things better when you're standing on the stage," Harvey says. "You can feel the drums, and you can feel the bass. So, being able to feel the music through the floor, it makes me feel like I'm a part of the band and not just the only person in the room who doesn't really understand what's going on."

This is because Harvey is deaf. The 29-year-old singer-songwriter from Cincinnati, Ohio, was born with near-perfect pitch. But she was also born with a deformity in her ears that made it difficult to hear — but not impossible, thanks to the use of lip reading and hearing aids.

But as the years passed, the hearing aids stopped working.

"I didn't wake up one day and just couldn't hear," she says. "I woke up one day and realized I was having difficulty, and that I had overcompensated by lip reading, so that I didn't really understand how bad it was."

That was a decade ago. Harvey had just started her freshman year as a music major at Colorado State University. By the end of the school year, all of her residual hearing was gone — along with her dreams of becoming a choral director. She dropped out of school and fell into a depression.

One day, her father, Joe, suggested they play a song together on the guitar like they used to. She was game.

Then, he suggested they learn a new song — and that she sing.

"I expected it to be utter crap," Harvey laughs. "I ended up being accurate with my notes. That kind of was a door open for me."

And that door was one that unexpectedly led her to the stage.

"I used to hate performing. [I had] such anxiety," she says. "I would throw up or blackout. It was horrible."

But Harvey says that losing her hearing actually helped her get over that fear. Now, she has hundreds of shows to her name and four albums, including a new one that will be released later this year. She has gotten so good at performing that sometimes, the audience wonders if she's really deaf.

That questioning of Harvey's disability is something that Wayne Connell can relate to. Connell is the founder of Invisible Disabilities, a Denver nonprofit that aims to educate people on invisible disabilities and connect those who have them. His wife, Sherri, has multiple sclerosis.

"We've created an idea [of] how people are supposed to look when they're broken," Connell says, "and so when you don't fit that imaginary mold, then it's a trick, or you're a liar — or you're not really broken, so you shouldn't be doing certain things."

Like sing, or hold a conversation; or, in Sherri's case, park in certain places.

"We would park in disabled parking," Connell says, "and people would scream at her because she was not in a wheelchair."

Connell says that because of the wide range of invisible disabilities, it's impossible to know exactly how many people are dealing with them. Harvey, who has been a voice for Invisible Disabilities for years, says that dealing with her disability every day can sometimes feel like a battle. "There are days when I lose," she says, "and I'm depressed and I can't get out of bed."

But Harvey is now on her biggest stage ever – national television. And she wants to be judged on her voice and her songs, not her backstory.

"Not that I'm hiding my disability or whatever you would call it," she says. "I don't find it to be really a disability. It's just I do things differently and I want people to appreciate music for what it is, and not because of a story. I'm not a story; I'm a person, and my passion is music. And I want your passion to be my music – so, judge me on my music."

On Sept. 20, during the finale for America's Got Talent, that's what voters will have to do. 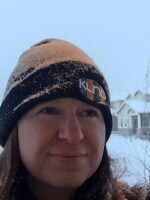 Stacy Nick
After almost 20 years in print journalism, I’ve made the leap to radio – and KUNC – as the resident arts, culture and music reporter. I admit, I couldn't carry a tune in a bucket with a handle, but I have a deep appreciation for those who do have musical talent, as well as anyone who dances, acts, paints, or otherwise utilizes the creative process.
See stories by Stacy Nick