We get used to things. It could be a squeaky hinge on a door we don’t hear anymore, or the way we automatically dodge the edge of a counter that sticks out just a little too far. As Lake Effect essayist Mel Miskimen works on her house, she wonders if she’s become too laid back:

I was in the upstairs front bedroom stripping the 1880s walls of 1980s wallpaper. It was a Saturday morning. The neighborhood was in the process of waking itself up, figuring out the plan for the rest of the day, and then ...

Gun shots. Close enough for me to hear the ping-ping-ping of spent cartridges hitting the pavement. So ... what did I do?

I moved the ladder. Put on latex gloves and continued my assault on Laura Ashley’s Thistle pattern. I hadn’t heard any follow up volleys. No screaming. No squealing tires. Nothing that would have required my immediate attention. If it hadn’t been for the 15 minute waiting period for the wallpaper dissolving solution to take effect, I wouldn’t have gone outside to see if ... maybe there might be ... anything?

I grabbed a plastic bag in case the perp was still out there ... thinking they would think I wasn’t looking for anything incriminating, just litter, when the police pulled up and started taping off the street. The officers moved at a pace that didn’t belie any urgency. You want to know what the shocking part was? Not the fact there was a shooting, or that the victim had called 911 and driven themselves to the hospital but that the police department allowed man buns!

Officer Man Bun took notes on what I had seen and heard. I told him the exact number of shots. Gave a description of a car, the occupants, unfortunately it had had no plates. He complimented me on my observational skills. I told him I had been trained from an early age to notice distinguishing marks, remember license plate numbers, because my father had been a police officer.

I had been working on a project and had my father’s old police notebooks from the 50s and 60s. I ran inside, grabbed a few. Gave them to officer Man Bun. He chuckled as he read the accounts of knife fights. Foul language. Drunks. Kids throwing rocks. He sighed. “Seems ... almost quaint.”

I brought up the 1960s and 70s, when I was a teenager and my father was The Man. Definitely not quaint. “Must have been interesting,” he said.

“I’d have gone with difficult,” I said.

“Nothing to worry about,” he said.

Apparently the shooting had been an old boyfriend v new boyfriend kind of drama. Words had been exchanged before shots had been fired. “Yeah, they, uh, unfortunately use the same drug dealer ... and that’s how they both ran into each other ... ”

They had pretty much wrapped up their investigation. The crime scene no longer taped off. I went back to my task, peeling wallpaper off the walls in large pieces, like sunburned skin from my husband’s back as if nothing had happened.

Lake Effect essayist Mel Miskimen is the author of Cop's Kid and Sit, Stay, Heal. She lives in Milwaukee. 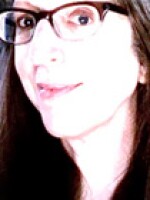 Mel Miskimen
Mel is a contributing writer for More Magazine, guest blogger on The Huffington Post and the author of Cop's Kid. She lives in Milwaukee.
See stories by Mel Miskimen
Go to Lake Effect's homepage