The midterm elections are fast approaching and there are a lot of different efforts to encourage people to get out and vote.

But a segment of the Wisconsin population that may be overlooked is people who are incarcerated. Currently in Wisconsin, if you're incarcerated for a felony, you are ineligible to vote. The same applies for those under felony parole or probation, which totals around 65,000 people who can't vote in the state. EXPO (EX-Incarcerated People Organizing) is working to reach the family members and communities of incarcerated people in Wisconsin and encourage them to vote.

Ramiah Whiteside, the Associate Director of EXPO, got involved with the association after serving a 25 year sentence. There is often the notion that those who are incarcerated are not concerned or interested in politics and elections because they cannot exercise the right to vote. But according to Whiteside, this notion is not entirely true.

"One of the things that [we did was watch] news and election cycles. But there was always a sense of being voiceless because we knew we didn't have a voice. So, we would have the discussions amongst each other," he says.

Despite the inability to vote, many incarcerated people are highly invested in elections, according to Whiteside. "People on the inside, do have relevant opinions and relevant feedback. Want to be engaged even though [they] can't go and cast a ballot," Whiteside says.

Since his release and starting his work with EXPO, Whiteside has noticed a neglect from voter outreach initiatives toward the families of incarcerated people and seeks to fix this disparity.

"Traditionally, those incarcerated have been written off. This is a unique program and why? The easy answer is, ‘Well they can’t vote, why would you even talk to them?’ Well, we want to talk to them because we know connected to them are people who can vote," he notes. "So that's a broader scope of having leverage and having an impact."

One of the biggest and impactful misconceptions that Whiteside has encountered while doing this work is a person's eligibility to vote while holding a felony. Being charged with a felony does not immediately and indefinitely dismiss a person's right to vote.

"You can have a felony in the state of Wisconsin and still vote. You just can't be doing felony supervision or currently be incarcerated. That's the difference," explains Whiteside.

"The more people you know who have been removed from your support system ... the less likely you are to have the conversations about our democracy, or about our politics or about voting," he adds. "So the more we can have those conversations, regardless of the temporary wins in voter turnout, the more [voting] will become automatic."

You can learn more information regarding voting and incarceration, as well as stay informed for the upcoming midterms with information on the candidates, their positions, voting processes and other pertinent information in our voter guide. 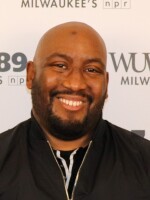