Tobacco growers are about to face a completely free market. This month, they'll receive their last checks from a government program meant to ease them out of a Depression-era tobacco-price-fixing system.

That has left Stanley Smith, who grows about 60 acres of tobacco on his farm not far from Winston-Salem, N.C., feeling a little unsettled.

"I've farmed all my life," Smith says. "I think the best way to sum it up is our safety net now is gone."

The safety net is the Transitional Tobacco Payment Program, also known as the buyout. Since the 1930s, the government regulated the tobacco market with a quota system. It limited how much a farmer could grow to control supply and demand, and farmers profited. That ended in 2004 with the $9.6 billion buyout program that paid growers yearly sums to help them adapt to the free market.

"Twenty-five, 30, 40 years ago tobacco was clearly the most profitable thing you could do on the farm," says Tim Hambrick, with the agricultural extension office in Winston-Salem. He says back then farmers could get $1,000 an acre. Now it's more like $200. So they have to grow more tobacco to make the same money. Farms get bigger, or they get squeezed out. And everyone is trying new things.

But tobacco is still big business. The U.S. tobacco crop has been steadily bringing inabout $1.5 billion a year and may even grow, given the global nature of the market. Blake Brown, an agricultural economist at North Carolina State University, says even though Americans are smoking less, overseas markets are promising. And there's still demand for the highly prized North Carolina leaf.

"So I think for the next five years, demand for U.S. tobacco may be stable and could actually increase a little bit because of the export demand, but we don't know exactly whether the growth in China will offset the decline in demand in the U.S. and Europe," Brown says.

And another unknown: how e-cigarettes will affect the demand for tobacco leaf.

It's the growers at larger farms that have a little more breathing room. Marvin Eaton grows 200 acres of tobacco, along with grain and strawberries, in Belew's Creek, N.C. He has a contract with Philip Morris and R.J. Reynolds. Right now, that's paying Eaton's bills.

"The companies, they're in control, and if they don't want Marvin Eaton raising tobacco and I can't make a living on what they say they're going to pay me for, then I, Marvin Eaton needs to get him something else he enjoys doing," Eaton says.

For now, Eaton is hopeful. He points to his son, who has finished college and is back home to help his dad and learn the family business. Buck Eaton stands watch over a giant conveyer belt that's sorting tobacco leaves. Someday this farm will be his.

Tags
Economy & Business NPR News
Emily McCord
Emily’s love of music brought her to public radio, where she found her love for news. After receiving a Bachelor of Arts in music at the University of North Carolina at Greensboro, she began her career in 2003 at WFIU Public Radio in Bloomington, Indiana, producing and hosting music and news programs and learning the behind-the-scenes work of public broadcasting. She joined WYSO in 2007 as the host of “All Things Considered” and jumped head first into news gathering. Emily’s been relishing it ever since-her reporting has earned her numerous AP Awards and a nationally recognized Gabriel Award. WYSO has been a fulfilling and exciting place for Emily, where she is privileged to work with a creative and supportive staff.
See stories by Emily McCord 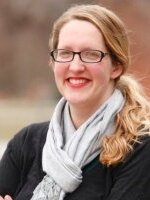 Emily McCord
Emily joined WFDD in 2014. It’s a homecoming after 11 years working in public radio for stations in colder climates. She graduated from the University of North Carolina in Greensboro in 2003, where she earned her degree in music. She moved to Bloomington, Indiana where she saw an advertisement on the side of a bus for the local station, WFIU, and began volunteering. That turned into a full time gig, where Emily did everything from producing fund drives, co-hosting a classical music quiz show, and handling station relations. In 2007, Emily accepted a position at WYSO in Yellow Springs, Ohio as the host of All Things Considered. It was there that Emily learned how to be a reporter. Her stories won state and national awards and were regularly featured on NPR. Emily became News Director at WYSO in 2011.