After the rail line shut down, Milwaukee County took ownership of the land. The building was in need of many repairs and was demolished in 1968. Since then, the site has been besieged by false starts and failed plans. The trouble all started when the rail company discontinued service to Milwaukee, according to Milwaukee Journal Sentinel business reporter Tom Daykin.

"The depot was this beautiful, historic building that sadly was demolished, which preservationists today still lament," he explains. "That was actually at the sight of what is now O'Donnell Park, right where East Wisconsin Avenue comes to an end. But if you go south of that, there was also this big rail yard tied to it and that's basically The Couture site."

The county planned to build a freeway along the lakeshore. However, the project wasn't popular with the public and the funding couldn't be met so the plans were abandoned. "In the early '80s, the county had these properties, had to start finding a use for them. They came up with O'Donnell Park for the depot site and then for the railroad site they came up with the idea of doing the Downtown Transit Center," Daykin says.

The Downtown Transit Center opened in 1992, but it was short lived because it wasn't widely used by bus riders. It basically sat empty until 2016 — Barrett-Lo Visionary Development bought the land and tore down the center to make way for The Couture.

The Couture development has since hit several legal and financial road blocks. A question was raised about the property's proximity to the lake bed, forcing a drawn-out battle that required a state law change. The developers have also struggled to gather the finances needed for the project. The most recent estimate on when construction could begin is mid-2020. 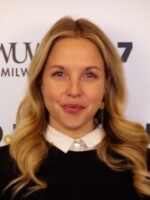